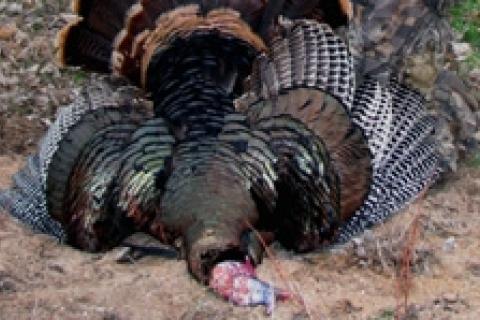 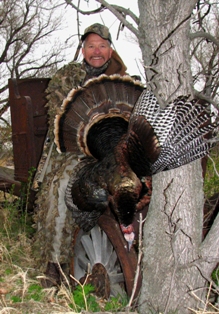 If early hunting season turkeys are still be bunched up in their wintering flocks or just beginning to break up into smaller breeding flocks, there are a variety of different calls I like to use. Each call has its own advantages and disadvantages, as well. One thing is for sure: Spring turkeys have their own type of behavior, but turkey hunters can use those behaviors to thier advantage.

I have had the best success turkey hunting in the early spring. Depending on where you live this might be as early as the middle of March or as late as mid April. Maybe they haven't been shot at yet or perhaps over the long winter they have become use to the intrusions of man. Whatever the reason, I have found that the birds respond better to calling earlier in the season.

In my turkey hunting vest you will find three different kinds of turkey calls and maybe a locator call or two. The calls that I carry include a cedar-wood box call, a slate-type turkey call and a diaphragm (mouth) turkey call.

Why so many calls?

There are many variables to be experienced in the turkey woods and all of them are subject to change. Weather — wind especially — can drastically reduce the effectiveness of lower volume calls like a diaphragm type. Another variable is the progress of the breeding season and its affect on the bird's vocalizations. Mix both of these together and you have enough calling challenges to keep you on your toes all season.

The box call, when employed correctly, can be deadly in pulling in those boss toms. For that matter, it has served me well in the early season to pull entire flocks to my setups. For one thing, it can be one of the loudest calls out there. The sound generated off those box sides will carry a long way, even in strong winds. Another feature I really like about a box call is that with practice you can sweet talk those wary birds with a wide range of purrs, clucks and putts. If you need to get their attention or rile them up a bit, a box call can generate loud cackles and gobbles, too.

For all its versatility in making turkey talk, a box call can be 'high maintenance'. If it gets wet from rain or snow, or being dumped in a creek it is not going to sound as good as it does when it is bone dry. These fine calls are subject to warping, too if they're wet for too long.

To get the best sound out them, frequent applications of chalk are required. It is easy to lose little pieces of chalk while out there searching for boss gobbler. Lately some of the better sporting goods stores have been carrying larger chalk pieces, about an inch in diameter. They're a lot easier to find in the bottom of a vest pocket than the smaller, pencil-sized chunks.

Another possible drawback to these calls is the small rubber band that wraps around the top of the paddle and the bottom of the box. Rubber bands deteriorate rather quickly and can break or get flung off into the weeds when you least expect it. Always carry a couple new, properly sized rubber bands wrapped around that paddle handle. That way you'll have one handy if you lose one.

The box call and the slate call both require two hands to get the best sounds out of them. Some of the motion needed to "talk the talk" can be enough to alert an old bird to your set up quick as a wink. Keep your hands low and well-camouflaged to prevent this from happening.

The slate call too, has been a killer call for me. There are literally dozens of these kinds of calls on the market. With striking surfaces ranging from actual slate stone to glass to aluminum. Some claim to generate sound waves at specific frequencies that tap into some kind of turkey 'love-to-love-ya-baby' groove that of course, is irresistible. I don't know about all that, but these calls are capable of a wide range of turkey sounds and volume levels that can work very well. It can take a bit of practice to get the right sounds out of them. With a little perseverance though, just about anyone can make 'em sing.

Another call that a turkey hunter will want to master is the diaphragm call (also known as a mouth call). Some folks can have difficulty with these small half-moon shaped calls. They're held inside the mouth, up against the palette with varying pressure from the tongue. This positioning can cause gagging, so be sure you practice using this one long before turkey season arrives. There are a lot of CDs and DVDs out there that can help you along the way to become a maestro of this style call.

A great thing about the diaphragm call is that it is completely hidden from view and requires little to no movement when making your calls. They are not as good for windy conditions though, as it is difficult getting a lot of volume out of them. For in-close turkey work though, they are ideal. With some soft clucks and putts you can begin your calling sequences without alarming unseen birds nearby.

The variety of sounds you can make with these mouth-held calls is nearly infinite. They don't necessarily have to be turkey sounds, either. Coyote howls, crow calls, goose and elk calls can all be made with the same "turkey" diaphragm.

The coyote call can come in handy as a shock-type call to locate toms, as they will gobble back angrily to betray their location.

At the beginning of the season in my home state of Colorado, it is common to find the birds "henned up". That is, they have not yet broken up into smaller breeding groups from their larger, wintering flocks.

As the birds have been traveling, feeding and roosting together throughout the winter months, they have established a refined hierarchy amongst themselves. This pecking order affects the hens as much as it does the toms and jakes. From my experience it appears that one or two older, breeding-age hens will lead the flock on their daily rounds.

While the toms now jockey for breeding rights and dominance within the group, the hens for the most part, will be ignoring them. They seem more intent on foraging in preparation for egg laying activities that will soon follow. That is, until some other hen comes into their territory challenging their dominance. This is where things can work in your favor.

If at all possible, scout the areas you hope to hunt prior to the season opening. Search for signs of the birds. If you can find a roosting area, great! Tracks, droppings and feathers can all indicate general areas the birds are using. If you can visually locate the birds, that would be ideal. As long as they have been undisturbed, the turkeys will be on the move throughout the day as they search for food, water and gravel. Try to pattern their movements. Note where they're coming from and where they're headed.

Once you've done your pre-season homework, you are ready to locate your setups. I have found it productive to be close to, but not directly on their established daily paths. This way you are working with the bird's natural inclination to follow their daily routine without disrupting their route.

Use turkey decoys if your state allows them for the best possibility of success. Personally, I like setting out a couple hen decoys with a jake decoy. This seems to appeal to the competitive nature of both sexes of turkeys. I like to place mine about 25 yards away and in such a way that the shooter will be off to one side. This way the attention of the turkeys will be focused on the decoys and not you. Being well camouflaged with special attention to your background is imperative.

Now it is time to start calling. If you've heard turkeys in the area, match their calls in both volume and tempo. If the woods have been silent, start out with very low volume clucks and purrs. These are especially effective early in the morning just before or after fly-down time. I cannot stress enough to start this calling sequence at very low volume. Fly-down is a dangerous time for these walking dinners and they are well aware of that fact. With turkey's incredible hearing don't be surprised to hear gobbles in answer to your calls from hundreds of yards away. 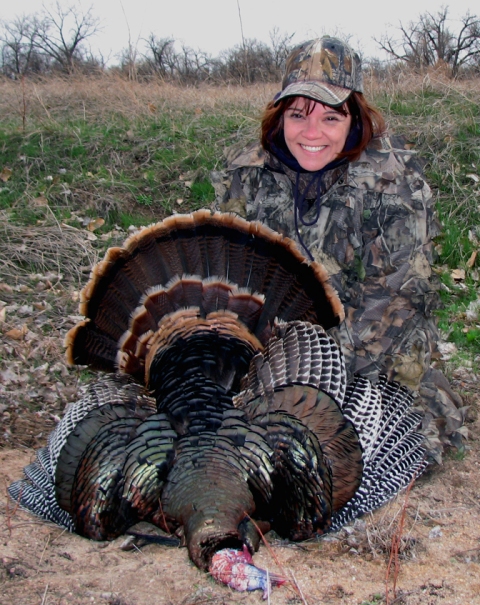 Once you get them talking back to you, do NOT over call. Again match their tempo. They may wait a full five minutes before calling again. If that's what they're doing, you should, too. This is a good concept to follow for most turkey calling situations.

Say the woods are silent early in the morning but you know birds are in the area. Try increasing the volume of yelping and clucks little by little. Keep a keen ear for any sort of response. Sometimes it will be the toms or jakes gobbling back, other times it may be the hens that answer. In the opening days of the season, with the male birds pretty much following all the hens around, you will do better to mimic the hens. Even though the toms will gobble in answer they are unlikely to leave the flock. After all, in the world of turkey love, she is supposed to come to him!

It isn't unusual for the dominant hen at this time of the year to go looking for this interloper in her woods. If your calls are being cut off, that is, answered before you can even finish your sequence, you may have that big girl on the hook. This is where it can get really fun. Instead of using just one call now, start mixing in the mouth calls with cackles and strident yelping while make similar calls with your box or slate call. Make it sound like there are multiple birds over here messing around in boss-girl's neighborhood. This is where I might even throw in a gobble or two. That can really get things heated up.

It is imperative to "read the birds" and adjust your calling accordingly. Just like great waterfowlers make the right calls at the right time, that's what you need to do with turkeys. If you can see them read their body language. If they appear curious, back off on the volume or timing of calling. If you can see them running in, keep up a good tempo. See if you can't get them to charge right in on your fake birds.

If all has gone well and the dominant hen has brought the whole crew along with her, the male birds will usually zero in on that fake jake. At this point, it should all be over but the slap of the trigger.

As in all hunting, be sure of your target and what's behind it. You don't want to accidentally shoot another bird behind your boss gobbler. In all the excitement, remain calm enough to make a good shot. It is really easy to lift your head as you make the shot which will cause you to miss. Make sure you rest that front bead right where the skin of the gobbler's neck joins the feathered portion before you pull that trigger. Do these things and you too, could be doing the happy dance in the spring turkey woods this year!

Teachers teaching the skills you need. Together with top rated Outfitters in North America, Bass Pro Shops 1Source and Global Outfitters helps you learn WHERE to go on your next adventure, HOW to learn the skill you…