4 Proven Hunting Techniques to Get Close to Spring Gobblers 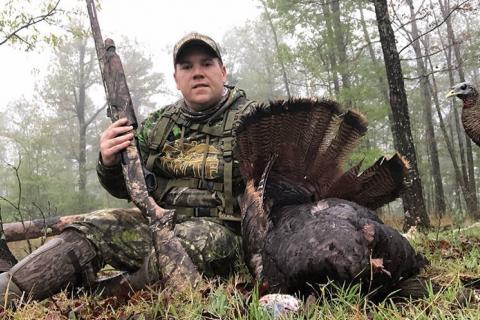 Getting as close to your targeted turkey as possible before making your first call is one of the most significant advantages that you can have when trying to call to a gobbler. When a hunter is able to get within a so-called ‘imaginary bubble,' it seems that magic is in the air, and the commitment of a tom coming to the call increases dramatically.

As a long-time turkey hunter, I have experienced the ‘imaginary bubble,' and this is how that story goes...

While winter-like conditions were still hanging on, opening morning of the spring turkey season seemed a little abnormal. With no foliage on the trees, the task of sneaking in close to a roosted gobbler was almost impossible. With minimal cover, I tried to use the landscape to my advantage, skirting on the bottom side of a hill, trying not to be seen as I moved closer to a tom who was gobbling on the roost.

With a little luck on my side, I was able to sneak around the hill, until I found myself in an open field a mere 20 yards from the edge of the timber. After slowly sitting down and continuing to try to hide from the nearby roosted gobbler, I was glad to hear the thundering gobble blast through the trees approximately 60 yards into the timber. To my advantage, the bird was roosted on the opposite side of the hill from where I had made my hunting set-up.

Within a few minutes, I heard the wings flop as he pitched off of the roost. As I listened to the leaves rustle from the landing, I made a couple of soft hen yelps on a FoxPro diaphragm turkey call, this was followed by another roaring gobble that echoed through the timber. A minute and a half later, I pulled the trigger on a big mature Missouri gobbler as he made the mistake of coming to the edge of the field to see where the hen calls came from.

Claim your prize this Spring by harvesting a nice bird because you were inside the “bubble” with these four hunting tips.

If you will talk to any veteran turkey hunter, the term ‘getting inside the bubble’ will probably come up. Many hunters, as well as myself, have experienced that if one is able to get inside of a 75 to 100-yard circle around a gobbler before calling, it becomes noticeably more comfortable to call him in. Many hunters debate on what it is that makes this happen, some say the toms think that the hen has committed to them, some say they are less worried about their surroundings or danger and get so anxious to see the hen that they come faster. No matter the real reason, it is a fact that if the hunter gets inside the “bubble," his or her chances of harvesting that particular bird increases dramatically.

Why You Need to Adjust Your Turkey Calling Techniques

The key to getting close to a gobbler whether he is still on the roost or on the ground is staying silent, thus not giving up the hunters location until they are set up and ready to start calling. This scenario is when locator calls can be an advantage if used correctly. Using a locator call such as H.S. Strut’s Mega Hooter Owl Call, makes a turkey gobble, giving up his location without making another turkey call which in turn gives up your position. Use the locator call to keep him gobbling as you make your way closer.

However once close to where setup is a possibility, remain silent. Let the tom gobble on his own a few times for the last few yards as he is getting closer to the setup. This keeps you from producing too loud of a sound, which could spook the gobbler if he is very near.

As for making actual turkey calls, you will want to create soft, quiet calls on a slate call such as the FoxPro Osage Crystal Friction Turkey Call, or with a diaphragm mouth call. The objective is to stay calm when sounding like a nearby hen. By calling too loud, a gobbler can sometimes get nervous and not gobble as much or even spook away, leaving the area altogether.

Tip: By calling softer and quieter, a gobbler is fooled into thinking he needs to come closer in hopes of finding the hen. By calling quietly, he doesn’t know the exact location, thus making him more curious, which in turn makes him come in at a faster pace

When trying to get close to spring gobblers, it is suggested to hunt early mornings when turkeys are still on the roost. When a gobbler is still perched, the hunter knows his exact location, making it easier to sneak in without being spotted. This is a much easier method compared to turkeys that are already on the ground, leaving the hunter unsure of their exact location, this also leaves the hunter vulnerable to being spotted by other turkeys nearby while traveling through the woods. If you do a lot of scouting weeks before hunting so that you remember where turkeys roost, you'll have a specific hunting location to travel to without disturbing the surrounding area.

Tip: If one will spend many mornings before the season, listening to turkeys gobbling on the roost from a far distance. They will then know where they roost consistently, as well as where they most generally go once they fly down.

Tip: Another great way to find where turkeys roost is by using binoculars such as Nikon’s Monarch 3 ATB Binoculars, from a far off distance. Hunters can watch them during the last few minutes of daylight to see which area they are in before flying up to the roost.

How to be Hidden From a Turkey's Prying Eyes

The last key point I'll make is about being able to get close to a gobbler before you start calling. You have to be concealed as much as possible from the bird. Turkeys have some of the best eyes among wildlife, being able to spot the slightest movement from several yards away. You will want to wear camouflage clothing on all exposed skin. This includes a camo face mask and gloves to conceal these two most visible areas to a turkey. Not only does this approach keep you hidden from a turkey, it also keeps all exposed skin concealed from other hunters. SAFETY is the most essential part of hunting, keeping your skin covered prevents other hunters mistaking a you for a turkey. Caution: Be sure to wear a blaze orange vest after the harvest as you are carrying turkey over your shoulder. This is another safety technique to alert other hunters you're not a live turkey!

If you do your homework you should know precisely where the turkeys will be opening morning of turkey season. Also, by taking your time, moving in close slowly and choosing your calls wisely, you can achieve a noticeable increase of harvesting a nice bird because you were inside the “bubble” of a majestic spring gobbler.

I am not very superb with English but I find this very easygoing to translate.
<a href="http://botanicalwonders.pk/almond-face-scrub">jovees apricot & almond face scrub</a>

Thank you for any other…

Thank you for any other excellent post. The place else may anyone get that type of info in such an ideal manner of writing? I have a presentation next week, and I am on the search for such info.