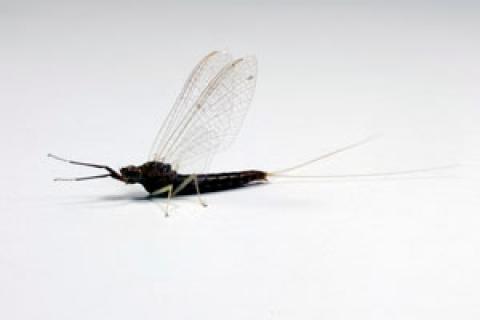 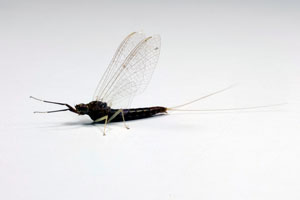 Mayfly nymphs are an important part of a walleye's diet during certain times in spring and summer. They eat nymphs living in mud, silt and sand bottoms of flats and bays, but they will also follow nymphs as they ascend to the surface to spread their wings, as it were. Here are some ways to mimic these morsels and put fish in the net.

A 3/32-, 1/8- or 3/16-ounce marabou or bucktail jig in black, brown, tan or olive are great choices when walleye are grazing on nymphs on bottom. A 2- to 3-inch leech, grub, finesse worm or Lindy Watsit Jig are other options. Tipping with a piece of worm or scent-loaded soft-bait helps stimulate strikes.

Use jiggles and nudges of the rod while swimming the jig along bottom. Keep it subtle and add lots of pauses. Vertical jigging also works. When nymphs are rising to the surface, start with the jig on bottom, then slowly swim and twitch it upwards. A small spinner rig tipped with a piece of worm also works for this up-swimming retrieve.

The above jigs also work under a slip float. Depth precision is critical to get fickle fish to chew with this approach. Note the depth of fish signals on your electronics and rig-up accordingly. Cast the float and work it back with short twitches, so the bait lazily rises, then drops. Sometimes soaking a piece of a worm or a leech and letting a lake's ripple dance the float is all that's needed.

Bottom bouncing a Slow-Death rig on a three to 6-foot lead is another tactic. It consists of a 1- to 1.5-inch piece of a nightcrawler or artificial worm threaded on a Mustad Slow-Death hook, Tru-Turn Aberdeen hook, Trokar Re-volve or Fin-Tech Slo-D Tech Rig. Specialty slow-death hooks cause the worm to corkscrew through the water, an action somewhat akin to a swimming nymph. As the name suggests, it's a deadly presentation. Be sure to try it.

Several anglers I know swear by casting and slowly retrieving a small, floating jointed minnowbait when walleye are gobbling nymphs near the surface and around weeds. The segmented lure's wiggling action fakes a swimming nymph to a certain degree. Brown and green paint patterns are recommended to replicate nymph coloration.

Use your most sensitive rod combos when fishing these rigs as walleye nymph-hits tend to be light.