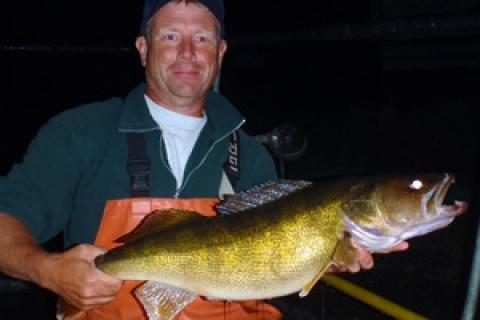 Ongoing research by multiple fisheries agencies in the mid-Atlantic region is revealing important aspects which will likely affect the way walleyes are managed, particularly in river systems.

Several years ago fisheries' biologists from the West Virginia Division of Natural Resources identified a particular strain of walleye it dubbed the "New River" strain — the waterway in which it was discovered. Since then WVDNR has established conservative bag and minimum length limits for walleyes on the New, Kanawha and Ohio rivers, in an effort meant to allow natural walleye populations to better establish themselves.

During that same basic time frame, the Pennsylvania Fish and Boat Commission discontinued walleye stocking on several major river systems, including western Pennsylvania's Allegheny River. The objective was to determine if natural reproduction was adequate to maintain a good walleye population. Walleye stocking is an expensive undertaking — one in which it makes no sense to plant fish in systems that can take care of themselves.

The agency has conducted surveys each fall since then to measure the level of young-of-the-year walleyes. During the 2013 fall survey on the Allegheny, the Fish and Boat Commission also collected fin clips of a significant number of the adult walleyes it collected. The samples were then sent to Ohio University in Athens for analysis. Of the 155 samples provided, over half have been tested at this time. All have proven to be river strain walleyes (called "Highlands" strain by the Ohio University researchers, but the same genetic strain as the New River).

Stocked walleyes in Pennsylvania are of the Lake Erie strain. They are hatched and reared at the agency's Linesville facility at Pymatuning Lake. So, the fact that all of the fin-clipped fish were river-strain proves that they were the result of natural reproduction, not stocking. It also suggests that stocked walleyes are making little to no contribution to the fishery (some samples were taken from fish old enough to be from the "stocked" era).

This information makes a strong case for the discontinuation of walleye stocking in rivers, leaving more fish to be stocked in reservoirs, which in many cases have little to no natural walleye reproduction.

Jeff Knapp, of Kittanning, Pa., has been covering the outdoors for over 20 years. He's been published in a wide variety of national, regional, state and local publications. He also operates the Keystone Connection Guide Service, which focuses on fishing for smallmouth bass on the Allegheny River, as well as other species in select western Pennsylvania waters.Â
END_OF_DOCUMENT_TOKEN_TO_BE_REPLACED