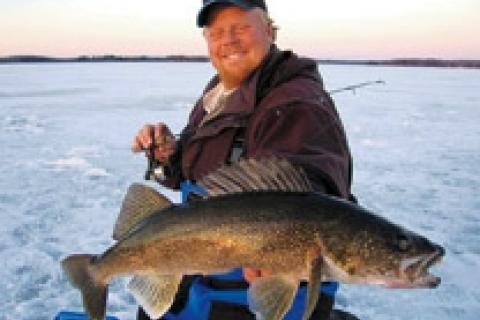 Allow me to detour a moment from widely accepted methods of catching early season river walleyes. Not every walleye (or sauger) responds to a vertically presented jig-n-minnow fished right under the boat.

Radical departures from the norm, as well as refinements to accepted practices, can mean more fish more of the time. River guides, whose wallet depends on consistently putting fish in the boat, don't have the luxury of waiting until the bite comes around to their favorite tactic. The versatility they've developed is shared here.

Tim "Hutch" Hutchinson (River Walleyes), based out of Prairie du Chien, Wisc., butters his bread guiding on Pool 10 and surrounding pools of the Mississippi River. One of his tips involves combining two terminal favorites into a combo that isn't widely used but one that he's found quite effective.

"I like to put a ringworm on one of my custom bucktail jigs," explained Hutch. Ringworms and bucktails are both popular tools; it's just that typically folks don't couple them together. Hutch does, and he reports that it was a vital component in Nick Johnson's win at the final Professional Walleye Trail tournament in 2011 on the Mississippi at Hastings, Minn.

Hutch begins using the bucktail/ringworm set-up in the late fall, and picks back up with it when conditions allow fishing in the early spring.

Presentation-wise, Hutch fishes this bucktail/ringworm in situations where he can cast/pitch it to the shore, and then ever-so-slowly swim/glide it back to the boat. Using the Bow-Mount electric, he keeps the boat on track as it drifts downriver. The jig will drift with the current, quartering downstream as the swimming retrieve is employed. On days when the slow swim isn't doing the trick, he'll experiment with a snap-jigging retrieve.

Hutch's bucktail/ringworm jigging is effective during high water conditions, which are common during the early spring bite. He likes focusing on outside portions of S-curves that have rock and rubble. Keeping the jig close to the bottom is important, but it's not necessary to be in constant contact, feel-wise. He suggested using bright line like Sufix's hi-vis yellow, and watching for the bow in the line that indicates when the jig is on the bottom. The easy-to-see line also acts as a strike indicator. Typically jigs (dark colors in dirty water) in the 5/16-ounce range allow the bottom to felt during the first part of the cast; then it's a matter of watching the belly in the line during the balance of the retrieve. Using a heavy-enough jig to consistently feel the bottom will reduce the frequency of bites, said Hutch.

Another of Hutch's early spring go-to tactics is showing stickbaits via three-way rigging or hand-lining. Years of experience have shown him that when these lures hang-up, it's usually on either the diving lip or on the rear treble.

"The hook Rapala puts on its baits are good hooks, but when snagged, they either break, or the line breaks," he reported. To minimize time lost replacing hooks or baits, Hutch swaps the rear hook with a Mustad round-bend treble hook (one size bigger than the stock hook). The wider gap of the Mustad hook frequently allows the hook to bend, rather than break.

When fishing less snaggy areas, he uses Rapalas in which he's switched out the stock rear treble with VMC's Barbarian, saying it's the nastiest hook he's found — fish-holding-wise — for river trolling.

Hutch uses both No. 7 or 9 original Rapalas. He adds a split ring to the lure's eye, as this allows it to be pulled through heavy current without rolling or and kicking out.

Up the river out of New Prague, Minn., Marty Hahn (Mississippi River Walleyes) guides on the Mississippi's Pools 2, 3 and 4. Three-waying Rapalas is his go-to presentation, but rather than using standard set-ups, he doubles things up to double his fun.

Hahn starts off with a pretty standard three-way rigging: 10/4 Fireline on the reel goes to one eye of the three-way swivel; the weight dropper is 12 to 16 inches of 6- or 8-pound test mono to the bell sinker; a 40-inch snell of fluorocarbon or abrasion-resistant mono serves as the primary Rapala lead.

This is where things stray from the norm. Rather than fishing just the single Rapala, Hahn ties a secondary 18- to 24-inch lead off the back split ring of the front Rapala, to which he ties a second bait. He leaves the rear hook on the front stickbait. Number 9 Rapalas are his standard-sized bait, though he will go up to as much as an 11. He'll also drop down to a 7, even a 5 when the fish are finicky. Hahn often fishes two sizes at the same time, presenting the larger stickbait in the front.

"The frequent question I get asked is, 'Does the front bait catch any fish?'" noted Hahn. "The front bait doesn't have much action. It's stretched pretty tight. But surprisingly, I catch more fish on the front bait than on the back one."

Hahn said he believes the dual-action look is the advantage of fishing two baits simultaneously. It gives the fish two distinct looks.

"When shad go through a dam in the cold water, they have that lifeless look, with just a bit of a kick or roll every now and then," he explained. "That's what that front bait imitates."

Commonly, Hahn uses a loop knot on the rear bait, allowing that Rapala the freedom to provide a livelier, contrasting action to the stifled one of the front bait. On days when the fish are taking the front bait, he changes up by tying a cinching knot to the rear lure to tone done its action.

When double-rigging Rapalas, Hahn uses a lighter sinker (usually 1- to 3-ounce) than what's typically used with three-way rigging. Thus the let-out is greater, and the angle of presentation is flatter. He hand-holds the fishing rod rather than plugging it in a rod holder.

"What really makes this system work is hovering right in place, sliding side-to-side along a break," said Hahn. "Lifting and dropping the sinker, even allowing the boat to slip backward a bit if there's enough current to keep the baits working."

Another of Hahn's tips relates to pulling jigs upriver. When he encounters clear water in the spring, or late winter before the snow melt-off muddies the river, he'll pull light jigs (1/16- to 5/16-ounce, depending on the current) back against the current. Hahn's approach differs from standard upriver jig pulls in that he'll allow the jig to rise several feet up off the bottom.

"In the clear water they'll rise up and crush a jig," he said. Hahn uses leadhead jigs with 4-inch ringworms for the upriver deal, typically working over clam beds.

In western Pennsylvania, I guide on both free-flowing and navigable portions of the Allegheny River. My contributions involve the use of suspending jerkbaits in a couple situations, as well as tube jigs.

On free-flowing rivers, during the early spring, walleyes often utilize the back channels of island areas for the correct spawning habitat. Feeding walleyes will nose into current areas at the upriver end of these islands, where the current plunges into the funnel-downed area.

A suspending jerkbait like an XCalibur X4s stickbait is an efficient tool for working these areas. But rather than using a defined jerk-pause as you would for smallmouth bass, tone things by imparting a more subtle twitch, pause, swim retrieve. Walleyes will hit the bait on the pause, just like a bass, but are just as likely to hit it during the steady, easy-to-track portion of the retrieve.

Expect to find feeding walleyes up next to the bank, tucked back just out of the heavier current. The presence of current-deflecting rocks/boulders (above the surface or sub-surface) increases the likelihood walleyes will be using the area.

On navigable sections of river, where in general the current tends to be significantly less, I find that larger walleyes will often be positioned on relatively shallow flats, while their smaller counterparts are belly down in the bottom of deeper holes. Jerkbaits are effective for combing these featureless flats. I like to allow the boat to slowly drift down the length of a flat while I make casts perpendicular to the current. The current will sweep the bait downriver during the steady retrieve. Once the line straightens out (a lot of the strikes occur at this point, at the end of the swing), continue the upriver retrieve until the bait is back at the boat.

Once you've reached the downriver point of the flat, use the electric motor to pull the boat back up the river, trailing the jerkbait behind, a foot or so off the bottom. Deeper flats — say 6-9 feet deep — tend to be fished better with a deeper diving jerkbait like a Rapala Deep X-Rap. Flats that run in the 3- to 6-foot range call for shallower ones, like a Bomber Suspending Pro Long A.

Finally, add tube jigs to your list of productive soft plastic baits that preclude dipping into a cold minnow bucket. Three- to 4-inch tubes fished on a standard insert style leadhead jig can be plugged into most situations that might call for a jig-n-minnow. The bait can be pitched to shoreline areas without the fear of casting off the minnow. Thin-bodied tubes like Warrior Baits' Teaser Tube flow through the water with little resistance when fished in a vertical slip-drift manner. Tubes are versatile offerings that warrant being rigged and ready during any early spring river foray.

Jeff Knapp, of Kittanning, Pa., has been covering the outdoors for over 20 years. He's been published in a wide variety of national, regional, state and local publications. He also operates the Keystone Connection Guide Service, which focuses on fishing for smallmouth bass on the Allegheny River, as well as other species in select western Pennsylvania waters.Â
END_OF_DOCUMENT_TOKEN_TO_BE_REPLACED