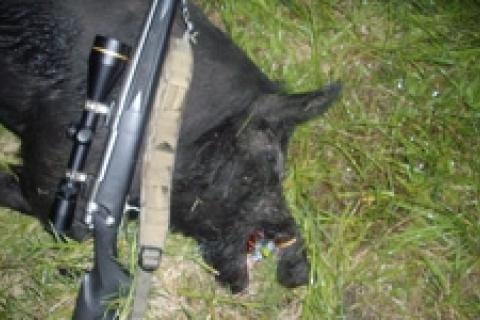 I had to run down to Florida the other day for a business deal. On Thursday afternoon Bubba told me we ought to go hog hunting. It took me about .032 seconds to say yes. Unfortunately a hurricane was in the making and blew in. In fact, we shut down the plant early Wednesday due to two close tornados, one only 10 miles away.

It rained all night and the next day and Bubba said, "Tom, the place is flooded. We can't get in. Let's wait until Friday night." It's kinda sandy like there so the rain soaks down somewhat, except in all the bog holes that the hogs root up.

So, Friday after work Bubba came by and grabbed me and off we went through the endless groves of huge oak trees, palmettos, saw grass and who knows what other kind of vegetation. It's thick. We set up at his cabin and were waiting for the sun to go down a little so the hogs would start moving.

A coon was on his corn when we pulled in and then in a bit an armadillo cruised by. They're unique animals. It's a wonder that they've survived this long. During the depression they were called Hoover Hogs since President Hoover had said there'd be a hog in every pot, which in many cases that hog was an armadillo.

Then out came a couple of Osceola turkeys. They have more of a brownish or rather a cinnamon hue than our turkeys do. They almost look like a small cinnamon bear moving through the brush.

Then Bubba spotted a smaller hog off to our left, maybe 80 pounds. He wanted to wait and see if a herd would come out so we didn't shoot. It was still super early. We hadn't been setting there 30 minutes I don't think.

The sun started dropping behind the trees but it was still broad daylight. Now's the time Bubbas said. It wasn't very long and he said there's a good one. It was off to our left feeding in an open pasture. I don't know where it had come from.

I slipped behind a few trees, got within 200 yards, found a good rest and touched one off. The .338 Win. Mag slapped him down hard. We set there another 15 minutes to make sure that nothing else was around and then went out and looked at him. He was a nice 180-200 pound boar.

No one else showed up so at dark we headed to another spot. "Whoa, there's a good one," Bubba said. We were in one of the more modern trucks that the doors lock and before I could get the lock figured out he got away. We should have had him.

In just a few more minutes we saw a really nice one and Bubba said, "Drop him." I jumped out and put the hurt on him. He was a nice boar. We didn't realize until we got up to him how nice he was. I didn't measure them but he had some nice 2-inch tusk. And to top off the night we got stuck in some of the bogs he rooted up and had to call a buddy to pull us out.

Ha, I guess it is nationwide, the debate over Ford vs. Chevy. When Russell pulled up he said sure, I'd be glad to pull your Chevy out with my Ford. We couldn't really say much, until he got us pulled out anyway. Well, it'd been a fun night. Thanks Bubba.