Okay, there a couple of hundred anglers fishing the Bassmaster Elite Series and the FLW Tour combined. Even though any of the anglers fishing could come out and take a tournament at any time, there are handfuls of anglers who look like they may have stellar years in 2015.

When the 2014 pro-bass season was about to start, there were several big-name anglers signed up to fish both the Bassmaster Elite Series and the FLW Tour. The list included Brett Hite (who won an event in each league), Randall Tharp (qualified for both championships), Greg Hackney (won on both tours and took home the B.A.S.S. Angler of the Year title), Jason Christie (won an Elite event), and Casey Ashley (won an FLW event), Steve Kennedy and Ish Monroe among others.

When fans of professional bass fishing talk about Gary Klein, they tend to discuss his professorial approach to the game. The amiable Mercury pro often gives some of the most insightful responses on stage at a Bassmaster event when queried about his day on the water. This is no show. Klein is that kind of angler. Thoughtful and focused, but not obsessed with titles and accolades.

Pro Walleye anglers Troy Morris and Corey Heiser are on a mission.

Early in 2014, the Fargo, North Dakota based tournament team announced an undertaking many may have thought difficult to impossible to execute successfully.That didn't turn out to be a problem at all.

Sure, Ott DeFoe qualified for the Bassmaster Classic in 2015. In fact, he double qualified by placing high enough in the Angler of the Year (AOY) points race and by winning a B.A.S.S. Open event. However, that doesn't equate to a great season in the mind of Bass Pro Shops pro DeFoe.

Main goal accomplished in 2014 for DeFoe.

High expectations are what many anglers fishing the Bassmaster Elite Series tour have each season. Some meet their individual expectations. Many never come close to getting where they'd like to be.

Mercury pro Greg Hackney may have had a mediocre season in 2013, but 2014 has been a comeback year of potential epic proportion. Hackney's win over the Bassmaster Elite field on Cayuga Lake out of Union Springs, NY was simply dominating. His final limit weighing 23 pounds, 15 ounces gave him a four-day total of (85-0). Keep in mind, Hackney spotted the rest of the anglers an extra fish since he was one shy of weighing a limit on the third day. 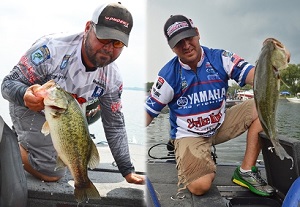 Here is the biggest non-shocker of the 2014 Bassmaster Elite Series season: Rapala pro Mike "Ike" Iaconelli won the Elite Series event on the Delaware River today out of Philadelphia, PA.